Ben Reeder’s parents claim they found him in a pineapple patch in Hawai’i and brought him home, which was their way of telling him that he was adopted. He grew up in South Texas reading Tolkien, Asimov, and Robert E. Howard. Ben has always loved telling stories, and in high school, he wrote pulp style action adventures for his friends. Ben has been filling notebooks and hard drives with stories and ideas ever since.

1. Why did you choose to write a dystopian novel?

I wrote dystopian as a sort of illogical extension of what I thought the world would be like if some people got their way. I keep seeing all of these elements of what certain fringe groups are demanding, and I started to ask myself what the world they want would be like.

2. Do you have any favorite dystopian literature? Authors?

My first taste of dystopia was Orwell’s 1984, so it has a special little dark place in my heart, but I’m also fond of Emma Bull’s Bone Dance. While it’s a post-apocalyptic piece, it also creates a world where the powerful gain so much by the suffering of others.

3.. Do you foresee any part of your book becoming reality?

If so explain. In my upcoming book Dämonjäger, I can see much more of it becoming a political reality if the extreme elements of the so-called Christian right were to get their way. Bearing in mind that these aren’t what I’d consider true adherents to that faith, but rather opportunists who have found that certain extreme measures can be justified with the right leverage along with the right passages from the Bible.

4.. Was there a particular event or idea in the real world that inspired your writing?

The primaries for the 2012 election were a huge influence on Dämonjäger, mostly because of the demands from the extreme edges on both sides. The world these people want is a utopia only for a few, and Hell on Earth for anyone else.

5. When writing your book, did you seek to only tell a good story or to get across a specific message?

A good story, in my opinion, always teaches us something, or inspires us while entertaining us at the same time. Truly great stories never leave us the same as we were when we started them.

6. What was the inspiration for your book?

Dämonjäger started life as my first and only attempt at fan fiction for a game.  I wanted to explore the conscience of an assassin seeking redemption. Instead, I found that I liked the idea of a wolf in the fold,  a woman who was a total badass walking around among “normal” people.

7. What other genres do you read?

Fantasy, urban fantasy and steampunk are among my favorites.

8. Have you or would you like to write in another genre? Which one?

I’ve written in YA and post-apocalyptic (zombie).

9. Are you particularly fond of any one of you characters?

I’m particularly fond of Lukas, of one of the supporting characters in my YA urban fantasy stories. He’s a geek, like me, and in the midst of all this power around him, he’s perhaps the bravest of all of the characters, even more so than my main character. Where the main character is a badass with dark magick, Lukas is an otherwise normal guy who faces down the same monsters with little more than his wits and a smart mouth.

10. Is there one book, in any genre, that has had a lasting impact on your life? Title. How did it affect you?

Jim Butcher’s Dead Beat is the one book that has had the biggest impact on me as a writer. From the first chapter, I felt like I was hearing my own voice, my own style. That was the book that made me realize that there was an audience for my voice. I finished my first novel about two years later. 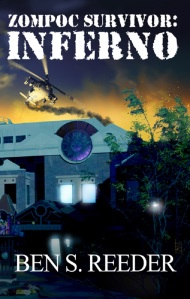